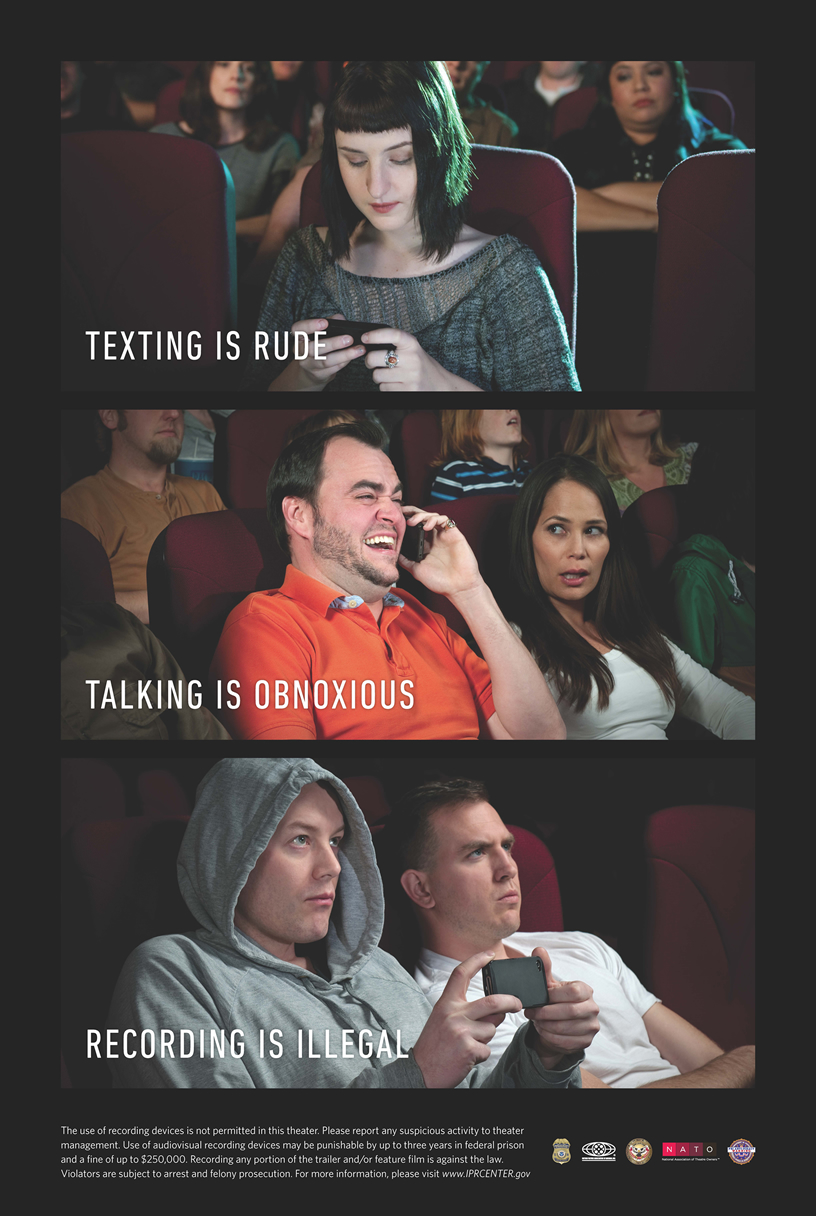 Combating movie theft is one of our industry’s top priorities.  When someone enters a theater with any type of recording device — camcorder, picture phone, voice recorder, etc. — and intentionally records or photographs any portion of the video or audio track of a movie, that person is engaging in illegal movie theft. Camcording is responsible for supplying 90 percent of newly released content to bootleggers.  Movie theft costs the film industry hundreds of millions a year from U.S. cinema ticket sales; globally, the cost is in the billions.

Movie theater operators are acutely aware of the increasingly harmful effects that IP theft has on our nation’s economy.

Working with the MPAA, NATO lobbied for a federal law specifically criminalizing camcorder theft in movie theaters, which President Bush signed into law on April 27, 2005 (See 18 U.S.C. § 2319B).  NATO and its regional units have also lobbied for state laws criminalizing camcorder theft in movie theaters and protecting movie theater employees who take action to stop such theft.  Such laws now exist in 41 states, Puerto Rico and the District of Columbia.  Furthermore, NATO supported the Canadian effort to create a similar statute, and in June 2007, Canada passed anti-camcording legislation.

Few issues are as bipartisan as fighting online theft, and NATO encourages our leaders on Capitol Hill to reach across the aisle to craft balanced IP enforcement legislation that targets infringers who threaten the livelihoods of 160,000 movie theater employees and undermines the nation’s economic growth.

Film Piracy In The UK: Who Gains And Who Loses From Film Theft  Produced by the UK Film Distributor’s Association

Summary of Technical Report: An Estimate of Infringing Use of the Internet Produced by Envisional. Comprehensive study on the total amount of Internet traffic that infringes on copyright.

Traffic Report: Online Piracy and Counterfeiting Produced by MarkMonitor Inc. Examines the staggering volume of traffic to websites dedicated to the sale or distribution of counterfeit and pirated goods and stolen digital content.