NATO and its membership have teamed with up and coming filmmakers to launch a new campaign to celebrate the big screen experience and continue to bring people back to movie theaters. This multi year campaign aims to drive consumer movie-going behavior and mobilize the industry to come together for the joint effort.

In its first year, NATO is working closely with some of the most talented up-and-coming filmmakers to create a series of three spots for a social media driven campaign. The campaign will premiere at CinemaCon 2022. NATO along with its members are inviting everyone in the industry including theaters, studios, supplier/partner brands, film professionals, industry organizations and especially talent to share the campaign across social media this Spring.

For the 2nd phase of the campaign In Fall of 2022 NATO will launch a nationwide platform for aspiring student filmmakers at partnered universities to submit their ideas for the next campaign. Spots will be reviewed and selected spots will be funded and produced with professional coaching from NATO’s Filmmaker program team as well as industry pros.

NATO is thrilled to be supporting the next generation of filmmakers. They are part of a rising, talented group whose creative vision and commitment will be driving the film business for the future. Who better to spotlight the love of the movies and the theater than filmmakers with a passion for telling stories?

To kick off this campaign, NATO will be releasing the 3 different spots that celebrate the movie going experience in theaters. Check out these 3 spots and keep an eye out for their debut. 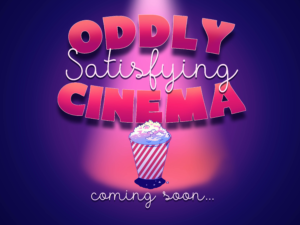 Written and directed by Kelly Schiesswohl and animated by Lucy Animation Studios along with Creative Producer Noah Sterling, Oddly Satisfying Cinema is a collection of animations celebrating the iconic tastes, smells, sights, and sounds of a night at the movies that we all know and crave. Each chapter ignites the senses with dynamic, 2D animation and spine-tingling soundscapes that transport us to the familiar, and beloved theatre space. Which aspect is your favorite? The buttery popcorn? Plush, leather recliner? The pop and fizz of an ice-cold soda? Watch Oddly Satisfying Cinema and experience them for yourself! 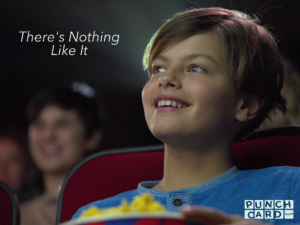 Produced by Punch Card Films and written and directed by Katie Staab and Ed Hellman, There’s Nothing Like It, tells the story of a mother witnessing her children completely lost in movie magic –as real life to them as the popcorn in their laps. Inside the theater, no one is afraid of the dark and gone are the “I’m bored’s” and the “When can we go home?”.  This film highlights the unmatched theater experience through observing others witnessing it for the first time. 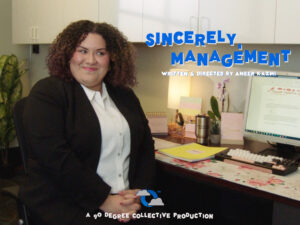 Written and Directed by Ameer Kazmi and produced by 90 Degree Collective,  this cheeky mockumentary revolves around a desk interview with movie theater manager, Aurelia. Amidst sharing with the interviewer how excited she is to be back at work, she mentions a pattern she’s noticing — some patrons have seemingly forgotten how to go see a movie. Aurelia discovers the documentary she’s partaking in will share her sentiment of “let us take care of you”.

NATO has created this content for all industry members to share.  Our request is that you add #NATOFilmmakerPlatform to your posts.  Scan the QR Code to gain access to the films, social media copy,  behind the scenes content and more…

Special thanks to our Production Partners: