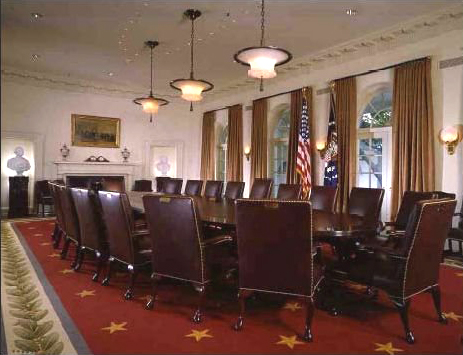 A new Congress has been sworn in, a new president has taken the oath of office, and all eyes in Washington are turning to the confirmation process for Donald J. Trump’s cabinet nominees.  Senate committees are in the midst of holding hearings to fulfill their constitutional duty to advise and consent, but the rules are different this time around.  Because of a procedural change instituted in 2013 by then-Senate Majority Leader Harry Reid, cabinet nominees can be confirmed by a simple majority vote of 51 senators.  Senators cannot threaten a filibuster on the nominees, thus gumming up the process and requiring at least 60 votes in order to proceed with a nomination vote.  With Republicans holding a 52-seat majority, unless some GOP senators defect, most—if not all—of Trump’s nominees will be confirmed to their positions.

This article explores some of the cabinet nominees and the impact their tenure may have on exhibition.

Andy Puzder, the CEO of CKE Restaurants, is Trump’s choice to lead the Labor Department.  Puzder is one of Trump’s most polarizing nominees:  While his supporters claim that his leadership of a major restaurant company is appropriate experience for leading the department, his detractors worry that Puzder won’t act to protect workers and will roll back reforms instituted by the Obama administration.

Restaurant industry groups welcomed Puzder’s nomination.  The International Franchise Association (Puzder is a board member) hailed him as “an exceptional choice,” and the National Restaurant Association said in a statement that he would “help foster an environment for job creation.”  Worker groups, by contrast, blasted his record.  “The WORST fast-food CEO!” Fight for $15 wrote in its petition asking the Senate to vote against his confirmation.  The Service Employees International Union—the union representing, among other employment sectors, food service workers—called Puzder “dead wrong for America’s working families.”

Puzder’s restaurant experience could prove a boon to exhibitors.  As a restaurateur, he is deeply familiar with the labor issues facing business establishments employing a primarily part-time workforce.  One area in which Puzder could have immediate impact is eliminating the Obama administration’s rule raising the salary threshold for overtime-exempt employees.  Puzder is a vocal opponent of the rule.  When it was released in May 2016, Puzder predicted in an op-ed that the rule would drive many employers to reclassify their salaried employees as hourly, thereby negatively impacting employee morale.  The overtime rule is currently in litigation:  Business groups and a number of state attorneys general sued the Obama administration for overreach, and in November a district court judge issued a temporary injunction that prevented the rule from going into effect on December 1.  The Obama administration is appealing that decision.  Presumably, if he is confirmed as Labor Secretary, Puzder will withdraw the U.S. government as a defendant from the case.  Puzder is also likely to support Congressional efforts to overturn the rule.

Puzder is unequivocal about repealing the Affordable Care Act (ACA).  In an industry speech delivered after the presidential election, Puzder said higher insurance premiums and increased labor costs have left people with less discretionary income, causing a “government-mandated restaurant recession.”  Aside from opposing the labor elements of the ACA, Puzder has also argued against the government’s interpretation of onerous menu labeling regulations.  In 2012, Puzder testified before the House Energy and Commerce Subcommittee on Oversight and Investigations on overregulation.  In his testimony, Puzder suggested that legislators and retailers compromise by allowing restaurants and similar establishments to post calorie counts online or adjacent to menu boards, which would give customers the information they seek and reduce the burden on covered entities.

On minimum wage, Puzder has been less clear in his position.  Puzder has warned that increasing minimum wage to $15 an hour would shut entry-level works out of the workforce, but he has also acknowledged estimates that a minimum wage increase to about $9 would not have as drastic an impact on jobs.  Even if he does eventually declare a position openly supporting a wage increase, Puzder is not likely to find many Republicans in Congress willing to take on this issue.

Trump has nominated Senator Jeff Sessions (R-AL) to be Attorney General.  In this capacity, Sessions will impact many operational issues facing exhibitors, including compliance with the Americans with Disabilities Act and antitrust matters.

Sessions does not have a strong track record on disabilities issues, although disabilities groups have blasted him for his record on education inclusion.  A coalition of 145 civil rights organizations, including the National Council on Independent Living and the Disability Rights Education and Defense Fund, signed an open letter to the Senate protesting Senator Sessions’ nomination.  In the letter, they included Sessions’ opposition to the ratification of the Convention on the Rights of Persons with Disabilities as a reason to disqualify him as Attorney General.  Democrats have vowed to focus on Sessions’ record on civil rights during his confirmation hearings.

On antitrust issues, his record is also less clear, although his detractors worry he would be lax on antitrust enforcement.  In 1998, Sessions wrote to Attorney General Janet Reno expressing concerns that U.S. antitrust officials were encouraging foreign countries to take legal action against American companies potentially in violation of antitrust laws.

Rep. Tom Price (R-GA), nominated as Secretary of Health and Human Services, is a former orthopedic surgeon and served as Chairman of the House Budget Committee in the 114th Congress.  Price can be expected to be an energetic proponent of health care reforms supported by exhibitors.  His nomination is not expected to face significant backlash.

Price opposed the ACA when it was enacted, and has introduced repeal-and-replace legislation in the past few Congresses.  Price’s health care bill does not include an employer mandate or a provision requiring calorie counts to be displayed on menu boards, the two biggest ACA issues impacting exhibitors.  While in Congress, Price supported legislation reforming aspects of the law.  He voted in favor of legislation reducing the burden of menu labeling and in favor of legislation redefining full-time employment under the ACA as 40 hours per week.  Price was also a cosponsor of legislation defining seasonal employees as employees who work for six months or less.

Price does not have a robust record on obesity or soda taxes; however, Price has been vocally opposed to raising taxes.  As is typical for many in leadership positions in Congress, Price has received campaign contributions from competing interests:  Both Coca-Cola and the American Medical Association have supported him.

Steven Mnuchin, a former investment banker and hedge fund manager, is Trump’s nominee to lead the Department of Treasury.  Aside from Andy Puzder, Mnuchin has the resume most closely linked to exhibition:  In 2006, Mnuchin formed a production company called Dune Entertainment, which in 2013 merged with Brett Ratner and James Packer’s production company to become RatPac-Dune Entertainment.  Mnuchin has partnered with 20th Century Fox and Warner Bros. to finance nearly 200 films, including hits like American Sniper, Avatar, Life of Pi, and The Lego Movie.  His Hollywood connections may come under scrutiny in his confirmation hearing.  Lawmakers may focus on Mnuchin’s relationship with the studio Relativity Media.  Mnuchin was a member of Relativity’s board and also ran the bank that lent tens of millions of dollars to Relativity.  Mnuchin resigned from the Relativity board on May 29, 2015; Relativity declared bankruptcy a couple months later.

Mnuchin has listed reform of the Dodd-Frank Wall Street Reform and Consumer Protection Act as one of his major priorities, particularly rolling back regulations that hamper bank lending to businesses.  Loans are the “engine of growth to small- and medium-sized businesses,” Mnuchin said in a CNBC interview.  He has not commented on whether he would support Congressional efforts to do away with the Durbin Amendment, which capped debit card swipe fees at 21 cents plus five basis points per transaction.  He has also vowed to lower the corporate tax rate and to enact an income tax cut for the middle class.

As Treasury Secretary, Mnuchin will have oversight of foreign acquisitions of American companies.  Within the Treasury Department is the Committee on Foreign Investment in the United States, a multi-agency body that investigates acquisitions of U.S. companies by foreign entities; much of CFIUS’ activities in recent years have been devoted to examining acquisitions by Chinese companies.  Mnuchin has not commented on Trump’s China stance, except to say that he wouldn’t necessarily deem China a currency manipulator.