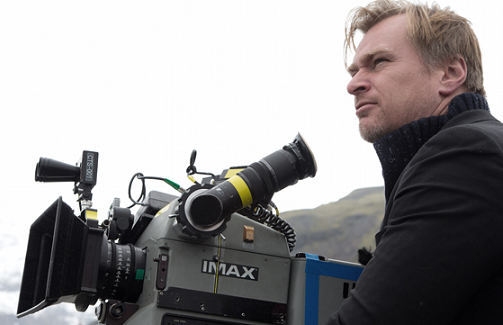 Christopher Nolan continues to be a huge champion of the theatrical experience. In an interview published today in Variety, Nolan weighs in on the power of theatrical, the importance of exclusivity, and other topics related to exhibition. Some key quotes:

There’s one point on which Nolan is immovable. For months studios and theater owners have been negotiating a possible deal that would enable movies to be available on-demand within weeks of their big-screen debuts. In return for allowing a film’s home entertainment bow to intrude on the customary three-month period of exclusive access afforded big studio movies, theaters would get a cut of the rentals. Nolan thinks the plan stinks.

Nolan likes seeing movies in the theater, hailing the communal experience of watching a story unfold with an audience. He also believes that there are economic reasons not to muck with a distribution model that’s lasted for generations. He noted that book publishers still release hardcover copies before debuting paperback versions as a way of maximizing revenue. That same kind of windowed approach — one that differentiates between a theatrical release, a home entertainment launch and television licensing — ultimately grows the pie, he reasoned.

“Every other industry, whether it’s the car industry or whatever, controls when a product is launched. The idea that the film business should forget that and just throw everything together at the same time makes no sense,” Nolan says. “It’s not good business, and people will realize that eventually.”

In a July 2017 interview with the Associated Press, Christopher Nolan held firm in his pro-theatrical stance.

AP: Because you’re such an advocate of the big-screen experience, you’re often asked about concerns about the demise of movie theaters. Is that tiresome?

Nolan: I will say it’s tiresome. Now it’s streaming. Last film, it was television. Ten years ago, it was video games. Look, video games are great. People love video games. But people also need and love washing machines and they sell a lot of those. It’s just not relevant. We’ve always had TV movies, we’ve always had miniseries, we’ve always had straight-to-video movies. We’re making movies for the theater. And theatrical experience isn’t just about the size of the screen or the technology behind, although that’s a big part of it. It’s about an audience, the shared experience. What cinema gives you, unlike any other medium, is this fascinating and wonderful tension and dialogue between this intensely subjective experience you’re having from the imagery the filmmaker has put up there, and this extraordinarily empathetic sharing of that with audience around you. It’s a remarkable medium for that and that’s what defines it. What’s a movie? The only definition of a movie, really, is it’s shown in a movie theater.